This following video, posted online yesterday, shows what are claimed to be attacks on Hezbollah positions in Syria and Lebanon by Syrian opposition members

This would obviously be quite significant if true, as it would mean members of the Syrian opposition are now attacking positions inside Lebanon.  There's a certain amount of additional information that can be gleaned from this video.  At the start we see a collection of 107mm rockets, generally used by rocket launchers such as the Type-63 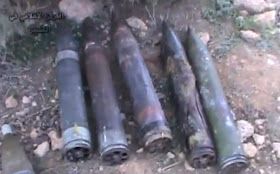 After that, we see one of the 107mm rockets loaded into a DIY launching platform of questionable accuracy

And finally rockets being fired 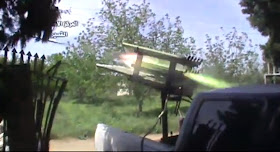 S-5 rockets are not designed to be surface-to-surface weapons, and are usually fired from rocket pods attached to helicopters or jets, so their accuracy is questionable when launched like this.

We then have a 2S1 Gvozdika self-propelled howitzer

What's not stated in the video is the name of the group involved in the attack, but fortunately the DIY multiple rocket launcher appears to be a unique design, and the same one appears in other videos filmed in the same region


You'll also note that the person operating the launcher in all four videos is the same guy, with a very distinctive arm-less jacket.  The above videos belong to the Omar al-Farouq brigade, although I'm unclear if they are related to the Farouq Brigades.

Thanks to Alex Rowell for highlighting this video, and Omar Horani for translation.