Photographs From Daniele Raineri Of Chemical Barrel Bombs In Syria

Today, the Daily Telegraph published a pair of articles on chemical barrel bombs in Syria, "Syrian chemical weapons use backed-up by second investigation", and "Found: the bombs that delivered Syria's chlorine gas" by Daniele Raineri.

Daniele took a number of photographs of the remains of the barrel bombs, some of which were published in the Daily Telegraph.  He's now given me permission to publish the remaining 59 photographs online, the full collection of which can be found here. 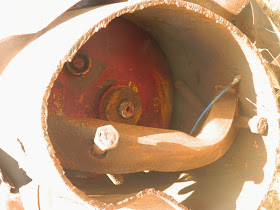 
As I noted in an earlier post, det cord has been wrapped around the neck of the cylinder, shown below 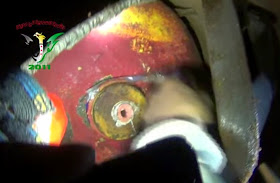 It would appear the function of this is to blow off the end of the cylinder using the least explosive power possible, reducing the among of chlorine gas destroyed in the explosion.  One photograph may show an example where this configuration has functioned as intended 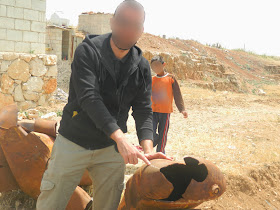 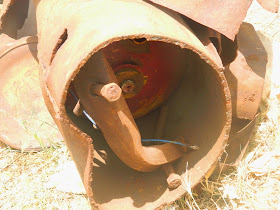 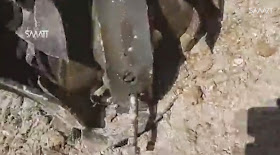 I believe the function of this assembly is to hold the cylinder away from the base of the bomb, so during impact the cylinder doesn't end up buried in the ground, preventing the release of gas.  There's also a slot in the casing of the barrel bomb, next to the end of the cylinder, which could be there to allow gas to be released on impact.  This would strongly suggest more effort has gone into the design of these munitions than simply placing a gas cylinder inside a barrel bomb.