The Mystery Of The Syrian Barrel Bombs

Update October 27th Clear footage showing DIY barrel bombs being dropped from a Hip has now been posted online, and can seen here.

Usually when I'm putting together a post about the various weapons being used in Syria I like to analyze videos, search through references looking at images, and matching as many details as possible before making a post about something, but this time I've come across something that's really got me stumped.

Just over a week ago two videos were posted from Batbo, about 35km west of Aleppo showing an unusual item that local activists claim was dropped from a helicopter
It's described as a "home-made bomb dropped by helicopter", and has some odd features I'm struggling to make any sense of.  First, it appears to have strange protrusions, as seen in this picture 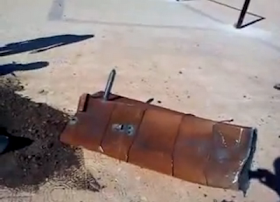 In these two pictures one of the men at the scene has picked up one of the protrusions that has snapped off, showing that it appears to be hollow 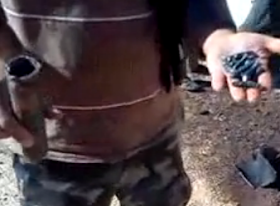 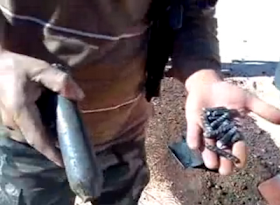 He also shows a collection of chopped up rebar that have been gathered from the black powder (explosive?), as shown below 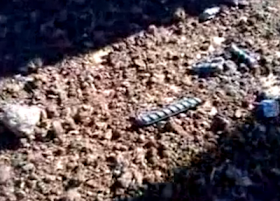 One other thing to note is that these don't actually appear to be drum style barrel, which are usually stamped out of one sheet of metal. The ridges of the barrel appear to be pieces of wire, one of which you can see has come away from the barrel in the below picture 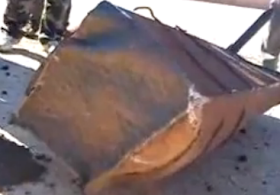 This shot from inside the barrel doesn't appear to reveal much apart from what appears to be another smaller curved piece of metal inside, possibly a cylinder 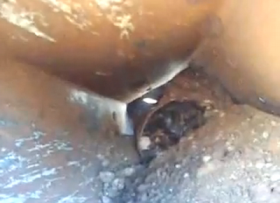 So all very odd, could this be some sort of DIY bomb being dropped by helicopters?  If they are, why are the Syrian Air Force using DIY bombs when they have so many OFABs of various shapes and sizes to use?

Several days later a new video was posted from Alrcaya in Idlib, about 80km southwest of Aleppo, which appears to show another barrel bomb
This one shares some features with the previous example, such as the metal wire around the outside of the barrel

But there's also something else that wasn't noticeable on the previous example.  I'm unclear what this is, but I'm thinking maybe a possible detonator, or smaller booster charge? 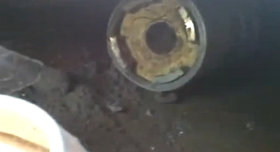 So I start looking for answers, trying to figure out what these items are.  One theory is that these could be IEDs disarmed by the Syrian army they decided to return to the FSA via helicopter.  There's some suggestion that they could even come from the truck bomb CJ Chivers reported about in his recent report on Syria, but after examining the images he provided they don't seem a good match to me.

Then activists started to mention reports of barrels full of explosives being dropped on Homs, something that is repeated in this Al Arabiya report
@hlk01 provided a translation of the video

The videos we've seen so far do not look like oil barrels to me, but to add to the confusion I came across this video, from Mdaya in Idlib, described as a barrel dropped from a helicopter
It looks quite unlike the previous barrel bombs, and appears to be a solid metal cylinder with a rounded end 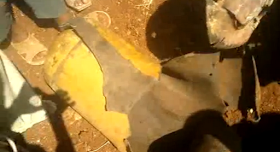 It appears there's a smaller cylinder that was part of the bomb, but it's unclear what function it had

And this collection of various bits of metal.  Could they be shrapnel for the bomb?

Could there in fact be a variety of these improvised bombs being dropped?  That might mean there actually are oil barrels full of explosives dropped, as the activists in Homs claim.

Finally we come to this video, which claims to be a 200kg dropped from a rear of a Mi-25 helicopter in Kafr Nabl, Idlib.  At around 15 seconds in you'll see something that appears to drop from the rear of the aircraft
It seems that for the moment we're left with questions rather than answers.  Are the Syrian military really using improved devices to attack the FSA? If so, why?

If you see any more examples like those shown above please let me know, this is one mystery I'd really like to solve.

Update August 31st Thanks to HamaEcho and Bjørn H Jespersen for the following videos and related discussion. First three videos from the freeeshem Youtube channel, from al-Hawash around 35km west of Homs, the first two show a numbered metal tube with pieces of cut up rebar arranged on top of it, presumably from the device
Then a third video with what appears to be more rebar and the possible remains of one of the devices that actually exploded

Then there's another video from al-Hawash showing a similar device with a different number printed on it
I'd be interested in know if anyone recognises these devices, let me know if you do.

Update September 1st The Daily Telegraph has an article on barrel bombs with more details of their use, including

Filled with TNT, oil and chunks of steel, the exploding barrels kill and maim across a wider area than high explosives.
"The sound was like nothing else I've ever heard. It was an almighty whoosh," said Mohammed Ibrahim, a fighter recovering from an explosion that he said was of terrifying intensity caused by such a bomb.
"I was lucky I was standing behind a corner but I was still knocked off my feet. When I came round my ears were bleeding."

Update September 1st I've come across a number of new videos, firstly this video from Deir Sonbol in Idlib via markito0171 shows what's described as the remains of a barrel bomb

@hlk01 sent me this video from Idlib showing another numbered barrel like the two shown above.  At first I thought it was the same as one of the earlier videos as the number printed on it matched, but as Bjørn H Jespersen pointed out there's actually additional parts on either side of the barrel which shows it can't be the same one, meaning those numbers aren't unique.  It also appears to have Russian text on it


This video from Derber, Dier Ez Zor, is supposedly the remains of a barrel bomb, although it's very difficult to tell, and appears to be outside the normal areas we've seen these bombs

The Daily Telegraph also posted a video that they say is what activists claims is the detonation of a barrel bomb in Homs.  In addition to that a number of videos have been posted online showing what's claimed to be the aftermath of barrel bomb explosions in Homs.

Update September 9th @BeJohnboy70 spotted this video that may show two barrel bombs in Hama.  Although the video is rather unclear the man in the first part of the video appears to show the camera cut up rebar as spotted in other bombs, and the bomb appears to have the same end as the other numbered bombs shown above


Another rebel, Omar Ahmed, who said he’d defected from the base two months ago, said that concerns about the loyalty of pilots – most of whom are Sunni Muslims, like the rebel force – had hampered the military’s use of aircraft. Assad and the country’s ruling elite, as well as many of the military’s officer corps, are Alawites, a sect that’s related to Shiite Islam. The Sunnis accuse the Alawites of discriminating against them.

Ahmed said that while he was on the base he’d been tasked with helping to build more than 100 “barmeels,” oil drums stuffed with explosives and shrapnel that have been used with devastating effect in Abu al Dahour and other areas. According to one military analyst, they’re roughly equal to a 1,000-pound bomb.

Update September 16th This video from Jericho, Idlib, shows another example of a barrel bomb, although in this example it's unclear where the explosive powder has gone


Update September 20th @hlk01 sent me another example, this time from Ain Larose, Jabal AlZawia, Idlib, in a video that shows one of the bombs being taken apart.


This second video shows what appears to be the detonator for the device, although it's unclear how it functions

On the same channel was this other example