In the past week Iran has been accused of violating a UN Security Council ban on weapons exports, including sending arms to Syria


The new report, submitted by a panel of sanctions-monitoring experts to the Security Council's Iran sanctions committee, said the panel investigated three large illegal shipments of Iranian weapons over the past year.
"Iran has continued to defy the international community through illegal arms shipments," it stated. "Two of these cases involved (Syria), as were the majority of cases inspected by the Panel during its previous mandate, underscoring that Syria continues to be the central party to illicit Iranian arms transfers."

The following video from Agraba, Damascus, shows a very rare example of evidence that supports those accusations


Here we have a unexploded 107mm rocket, typically launched by Type-63 multiple rocket launchers, a system used widely by both sides in the conflict.  It's claimed in the video that this has been fired by government forces, and appears to be fully intact.

Note the colouring of the rocket, as well as the marking.  Here's the rocket from the video 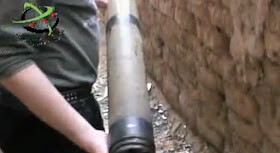 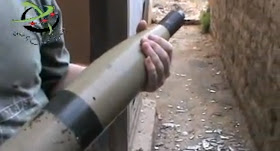 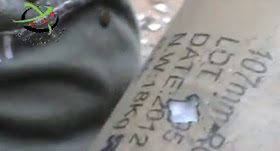 It's very clear the rocket in the video is a perfect match for the Iranian examples, and what's extremely interesting is the date of manufacture, which can be clearly seen in this screenshot 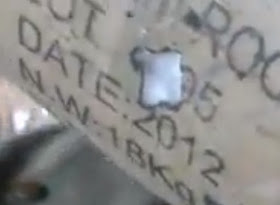 Now, unless the reports of an Iranian time machine are true, it appears what we have here is an Iranian rocket manufactured in 2012, during the Syrian conflict, and the arms embargo, that has managed to find it's way into Damascus.  With at 10km range it seems unlikely these rockets have flown from Iran to Syria under their own power, so this is very strong evidence that Iran has been arming Syria during the conflict, despite UN sanctions.