Since the August 21st alleged chemical attack in Damascus, I've been working to gather as much evidence as possible relating to the attack, and sharing it on this blog.  This post acts to summarise the evidence I've gathered so far, as well as examining some of the claims made about the attack.  This is all up for healthy debate in the comments below, and it should be kept in mind that "evidence" does not equal "proof" when debating this information.

What munitions were used in the attack?

Since the attacks the remains of only two munitions have been recorded by activists in Damascus.  The first, a M14 140mm artillery rocket fired from the BM-14 multiple rocket launcher (and variants), was filmed in Medmah al-Sham in Damascus, and footage recorded by the activists shows the UN inspectors taking measurements and samples from the munition.  The remains shown in the video are barely damaged, with only the warhead and connector missing.  This may be significant, as one potential warhead carries 2.2kg of sarin, but it should be clear there's also a smoke warhead for this munition.  As with both munitions linked to the alleged chemical attack, it seems only the UN report will clarify whether or not these were likely to be carrying any sort of chemical agent.  Only one example of this artillery rocket was recorded and put online, it's unknown if there's further examples at the attack sites.  More details on the M14 140mm and my identification of it can be found here.

The second munition linked to the alleged chemical attack is pictured above.  What's extremely interesting about this munition is it appears to be something that's unique to the conflict.  I've spoken to a number of arms and chemical weapons specialists, and they do not recognise this as any specific type of munition.  For the purposes of this blog post, and to save me having to write out "the unidentified munition linked to alleged chemical attacks" repeatedly, I will refer to this as the UMLACA (Unidentified Munition Linked to Alleged Chemical Attacks).

There's two main strands to understanding this munition in the context of alleged chemical weapon attacks in Syria; what the munition actually, and it's use in the conflict so far.

Working with a number of arms and chemical weapons specialists, we've tried to build a picture of what the UMLACA actually is.  It appears there's actually at least two types of this munition, one with a high explosive warhead, the other with an unknown non-explosive fill linked to alleged chemical attacks.  I'll refer to these as UMLACA-HE (high explosive) and UMLACA-UK (unknown).

Why do you think there's two types of "UMLACA"?

A number of videos have been posted online showing the UMLACA (see here), and what stood out were two videos, one from Khalidiyah, Homs, on August 2nd, and a second from Camp Sbeineh, Damascus, on August 29th.  In both videos the payload, a yellow high explosive powder, has failed to explode.  We can also see they share the same black numbering, and the base plate of the warhead has one hole on it, which will be significant when we look at the UMLACA-UK. 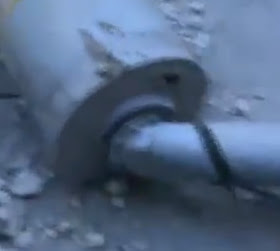 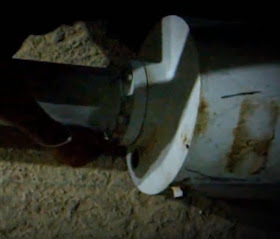 As I mentioned before, an explosive payload would do massive damage to a munition, and as we can see in the above videos there's a significant amount of explosive inside these munitions, so we'd expect very little to remain of the munition after it detonated. 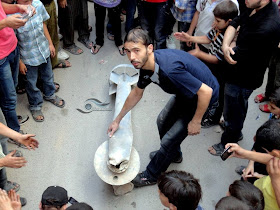 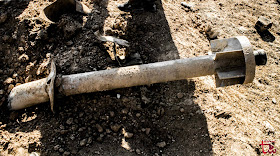 On the base plate of the warhead we also always see two holes, instead of the single hole on the UMLACA-HE base plate 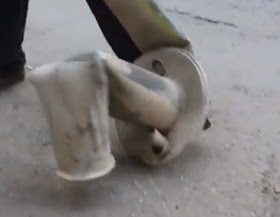 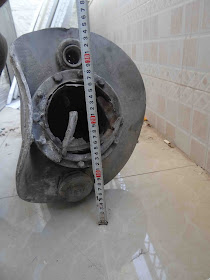 These holes are one of the theories and ideas that are being explored about these munitions.  They include:
- The second hole on the UMLACA-UK being a fill port for the fill of the warhead.
- Coloured markings indicating the type of payload, with yellow and black stripes marked on the UMLACA-HE.
- The UMLACA-HE having a longer rocket motor to deal with the heavier payload.

How are the UMLACAs launched?

A week after the alleged chemical attack in Damascus the following video was posted online, appearing to show one the UMLACAs being loaded and launched


Here we can clearly see the munition is rocket propelled, and launched from a tube launcher.  Arms expert Nic Jenzen-Jones described this launcher as an Iranian Falaq-2-type launcher in his blog post on these munitions.  There's also a  few interesting details that are worth highlighting; it appears there's a yellow band on the tail of the munition, which might indicate it's a high explosive type (as previously explained), and the tail section seems significantly longer than that of UMLACA-UK, with this clearly being longer than the men stood by it, while the UMLACA-UK's tail section seems around the height of an adults shoulders.  One other thing that's very interesting, at this point in the video, the man in the red jacket appears to be screwing something into the base plate.  Could this relate to the hole in the base plate we've seen in both types of UMLACA?

It should be stressed that the design of these munitions is highly unusual and distinct, so even from a distance they stand out.  For example, in this image from November 2012 we see another Falaq-2 type launcher with what appears to be the tail section of an UMLACA extending from the rear 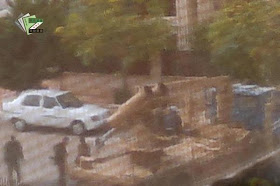 Which side is using the UMLACAs?

One thing to understand about these munitions is they aren't just linked to the August 21st attack.  Since January 2013 there's been a number of images of these munitions posted online, not always linked to alleged chemical attacks (which would be reasonable as we've established there's two types of munitions), but always showing the same design, and in all of these examples they are claimed to be munitions used by the Syrian military against the Syrian opposition.  Here's a list of videos by date and location

In all but the January 4th Daraya and August 2nd Homs video they are described as chemical munitions.  In the case of the 3 videos from Adra on August 5th, they are linked directly to an attack that took place on the same day, with videos of the victims of the attack showing the same kinds of symptoms.  I spoke to a doctor in Damascus who claims to have treated victims from both the August 21st attack and August 5th attack, and he claimed the symptoms where the same in both attacks.

The following video may also show the same munition being launched, from Qadam railway station in Damascus, currently under the control of Syrian government forces.

As you can see the profile of the munition seems to be very much like that of the UMLACAs, certainly we can see two sections, with the warhead section being much wider than the rocket section, and the proportion of the warhead to rocket being what we'd expect to see.  As I've said before, this is a very distinct looking munition, and I'm not aware of any other rocket in either sides arsenal that has this same shape.

So on the government side we've got everything I've posted above, but what of evidence that the Syrian opposition has these munitions?  As far as I'm aware, none exists.  I've been tracking the arms and munitions used by both sides in the conflict for 18 months, and I've never seen this being used by the opposition.  If they did have these, and were just hiding them from view, I'd ask why over the past few months they've also developed the Hell Cannon, a type of DIY mortar, and the Sayidna Omar Gun, a larger version of the Hell Cannon, when they already have access to an obviously superior type of munition?

How do we know these are chemical weapons?

That's the thing, we don't.  As I've said all along these are munitions linked to alleged chemical attacks, not chemical munitions used in chemical attacks.  It's ultimately up to the UN to confirm if chemical weapons were used, and if that's the case then it seems only the munitions above have been linked to the attacks.  One of the few things we can be sure of is it's not a persistent agent, otherwise the people filming and photographing these munitions would be long dead.  There's been some discussion about whether or not these are FAE (fuel-air explosive) munitions, but ultimately it's up to the UN to confirm the use of chemical munitions.  In fact, the following video from August 28th shows members of the UN team taking samples from the location of one of the UMLACA-UKs


What about the video of rebels firing a chemical weapon?

The following video has been doing the rounds after the August 21st attack, claiming to show the opposition firing a chemical weapon


In some versions of this video it's even the attack taking place, which is impossible as this was filmed in daylight, and originally posted on Youtube over a month ago.  What we're seeing here is the previously mentioned Hell Cannon, a type of DIY mortar that has been used widely by the Syrian opposition over the past few months.  The group who originally built them even put out a promotional video about them, showing being constructed, and the rounds being filled with DIY fertilizer based explosives


Maybe the Syrian opposition has been filling these with chemical weapons, but there's no evidence of that, just claims on Youtube videos, and they really mean nothing without actual evidence.

What about the video showing rebels ordering the use of sarin?

Another video doing the rounds at the moment is this one, claiming to show the opposition ordering the use of sarin


This is a copy of a video produced by Liwa al-Islam, their logo being in the top left corner.  It's of course impossible to know the soundtrack is authentic, because this isn't the original video.  Liwa al-Islam's Youtube channels have an annoying tendency to get shut down by Youtube, so finding the original upload of this video may be impossible, but if anyone has it, and wants to prove this videos soundtrack is genuine, please let me know.

I heard it was an accident, what about that?

Mint Press recently reported that witnesses had told them that the chemical attack was the result of an accident after opposition fighters accidentally blew up a load of chemical weapons they'd been supplied by Saudi Arabic.  I asked a number of chemical weapons specialists to give their opinion on the story, and they seemed unconvinced, and there's the questions of how one accident could effect a wide area, yet miss locations in between the areas effected?