Since the UN report into the sarin attacks on August 21st linked two munitions to the attack, there's been various claims made about who could have been responsible.  The New York Times summarises a number of key pieces of information that points towards the Syrian military being responsible here, and for my own part, I've stated I've never seen either of the munitions used, the M14 140mm artillery rocket, and the munition I named the UMLACA, in the hands of the Syrian opposition.

In response to that statement a number of people and organisations have claimed that the opposition actually does have 140mm rockets.  One example is from this piece from Press TV, 5 lies invented to spin UN report on Syria


Chemical weapons were delivered with munitions not used by rebels: This claim includes referencing "Syria watcher" Eliot Higgins also known as "Brown Moses," a UK-based armchair observer of the Syrian crisis who has been documenting weapons used throughout the conflict on his blog.
While Higgins explains these particularly larger diameter rockets (140mm and 330mm) have not been seen (by him) in the hands of terrorists operating within and along Syria's borders, older posts of his show rockets similar in construction and operation, but smaller, most certainly in the hands of the militants.

Despite what the author may have been told in the past, size does matter, especially when it comes to IDing munitions.  He no doubts refers to the sort of videos now being used to prove the opposition have 140mm artillery rockets, and here's a couple of the examples I've been sent

These, and similar videos, have been cited by a number of people as evidence that the opposition could have launched 140mm rockets.  The problem with this theory is, neither of these are the types of launchers that could fire 140mm rockets.  The top video shows the Type-63 multiple rocket launcher, which launches 107mm rockets, and the bottom video shows the Croatian RAK-12 multiple rocket launcher, which fires 128mm rockets.  There's also been a number of DIY rocket launchers shown in opposition videos, but I've never seen evidence of 140mm rockets fired from those either.  One thing that would stand out right way about 140mm rockets is the number of nozzles on the rear of the rocket.  Unlike many other types of rockets, they have 10 nozzles, so they are pretty easy to spot.  Evidence may exist, and if it does I'd love to see it, but I've yet to see any.

So, to say the presence of 107mm and 128mm rockets in the opposition's arsenal means they also have 140mm rockets is deeply flawed logic.  It's also important to note that the BM-14 launcher looks quite different from the above launchers.  The main difference is four more barrels 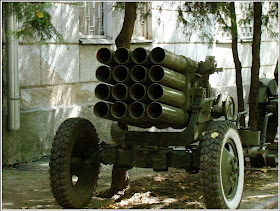 Something that's pretty easy to spot.

I'd also highly recommend watching the following video, published before the report, discussing the munitions used, in particular the M14 140mm artillery rocket.


In particular I recommend watching the section on the "179" marking found on the remains in Damascus, from 6:18 onwards, which details it's origin in the former Soviet Union.  More details of the origin of the munitions in Siberia can be found here.