Since the August 21st attack Russia has made a series of claims about the attacks that have evolved as the weeks have gone by.  The initial Russian reaction was to denounce the "biased regional media's....aggressive information attack, laying all the responsibility on the government", with Russian Foreign Ministry spokesman, Aleksandr Lukashevich claiming a "homemade rocket with a poisonous substance that has not been identified yet – one similar to the rocket used by terrorists on March 19 in Khan al-Assal - was fired early on August 21 [at Damascus suburbs] from a position occupied by the insurgents."  Clearly at odds with the UN report, which links two different types of munitions to the attacks, including a M14 140mm artillery rocket.

More new evidence is starting to emerge that this criminal act was clearly provocative.  On the internet, in particular, reports are circulating that news of the incident carrying accusations against government troops was published several hours before the so-called attack. So, this was a pre-planned action.

This appears to have referred to multiple reports at the time that some of the videos supposedly posted on August 21st appeared with a date of August 20th, as reported by a number of sites, with those claims being republished by sites such as Russia Today, and Voice of Russia.  Below we have a screenshot from Islamic Invitation Turkey Voice of Russia used in their coverage 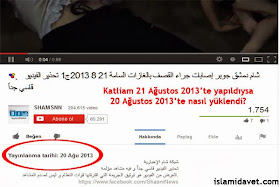 This obviously seemed like a very significant development, but one that hadn't been very thoroughly investigated by those making the claim.  Investigations by Storyful and others brought to attention that fact that the date displayed on YouTube videos from Syria are in fact the local time where the servers are located, in this case California, which is several hours behind Syria.  This results in videos being uploaded in the early morning in Syria being dated the day before.  It's possible to confirm the actual time a video was uploaded from metadata attached to the video, and all the videos from the August 21st attack were confirmed as being uploaded on August 21st using this data.


We strongly urge those who, in trying to impose their opinion on U.N. experts ahead of the results of an investigation, announce the possibility of military action against Syria, to exercise discretion and not make tragic mistakes

Following that statement Russia’s Foreign Minister, Sergey Lavrov, held a press conference, and referenced the now discredited claims about YouuTube upload times; "There is information that videos were posted on the internet hours before the purported attack, and other reasons to doubt the rebel narrative", adding "Those involved with the incident wanted to sabotage the upcoming Geneva peace talks. Maybe that was the motivation of those who created this story. The opposition obviously does not want to negotiate peacefully."  It seems the Russian foreign ministry's warning against "hurried conclusions" only went one way.

On August 29th the small independent media organisation Mint Press published a piece, Syrians In Ghouta Claim Saudi-Supplied Rebels Behind Chemical Attack, which the Russian foreign ministry would cite in a number of future statements.  The article claimed that "rebels received chemical weapons via the Saudi intelligence chief, Prince Bandar bin Sultan, and were responsible for carrying out the dealing gas attack."

The article has generated a great deal of controversy, not least for it's content.  One of the two claimed authors, Dale Gavlak, has now distanced herself from the article, claiming her contribution to the article was editing non-native speaker Yahya Ababneh's use of English, and helping Yahya pitch it to Mint Press.  She claims she clearly told Mint Press "this should go under Yahya Ababneh's byline. I helped him write up his story but he should get all the credit for this."  As her reputation was used to give the article by the virtually unknown Ababneh credibility, this controversy has brought the content of the article into doubt.


However, from numerous interviews with doctors, Ghouta residents, rebel fighters and their families, a different picture emerges. Many believe that certain rebels received chemical weapons via the Saudi intelligence chief, Prince Bandar bin Sultan, and were responsible for carrying out the dealing gas attack.

On September 16th Russia’s Foreign Minister, Sergey Lavrov, came out with more claims about the August 21st attack, dropping the earlier claims of YouTube videos being uploaded before the attack took place.


There is lots of evidence delivered by independent experts onsite [a nun from a local convent, other eyewitnesses and Western reporters] and European and U.S. experts, including twelve retired officers of the Pentagon and the CIA who sent an open letter to President Barack Obama to explain how the case had been falsified, unfortunately, a lot had been done before the St. Petersburg meeting by bad people who used poisonous chemical substances largely, in our opinion, to provoke a retaliation strike against the regime and shifted the responsibility for the use of chemical weapons, although that was totally illogical and Russian President Vladimir Putin said so many times.

Putting aside claims about nuns and retired Pentagon and CIA officers for now, you'll note he mentions "other eyewitnesses and Western reporters" as "independent experts onsite".  In a later comments made on September 22nd he's reported as saying


Evidence given by witnesses and journalists showed that rebels acquired “some shells from abroad that they had never seen and had no idea of how to use them, and then finally they used them,” Lavrov said.


Russia is still saying that it was the rebels who fired the chemical weapons on Aug. 21 — not the Assad regime?Yes, we believe there is very good evidence to substantiate this.

Are you willing to present this evidence?Yes, I just presented a compilation of evidence to John Kerry when we met a couple of hours ago. This evidence is not something revolutionary. It’s available on the Internet. They are reports by journalists who visited the sites and talked to the combatants, who said they were given some unusual rockets and ammunition by some foreign country and they didn’t know how to use them. There is also evidence from the nuns living in the monastery nearby who visited the site. You can read the assessments by the chemical weapons experts who say that the images shown do not correspond to a real situation if chemical weapons were used. And we also know about the open letter sent to President Obama by former operatives of the CIA saying the assertion that the [Syrian] government used chemical weapons was fake. So you don’t need to have any spy reports to make your own conclusions, you only need to carefully watch what is available in public.

As far as I'm aware, apart from the Yahya Ababneh's Mint Press article, there's no other journalists who have claimed to have visited the site, and recounted the story of  combatants who were "given some unusual rockets and ammunition by some foreign country and they didn’t know how to use them.".  It seems clear Lavrov has repeatedly referred to the Mint Press article, which has become increasingly controversial by the day.

Lavrov and the Russian foreign ministry also repeatedly refers to "nuns living in the monastery nearby who visited the site".  This seems to refer to the controversial nun, who has made a number of statements in the past supporting the Syrian government, including claiming the Syrian opposition were responsible for the notorious Houla massacre, and has been described as


According to the Swiss newspaper Le Courrier, Agnès-Mariam was “comfortable among [Assad’s] security services,” and she told their reporter it was hoped he could “dismantle the propaganda of Western media.”

On September 6th she was interviewed by Russia Today ('Footage of chemical attack in Syria is fraud'), and made a number of claims about the attack, which were later repeated in a 50 page report her organisation prepared.  According to a BBC report on her work, her report asked


In response, Peter Bouckaert, emergencies director of Human Rights Watch, stated "There's just no basis for the claims advanced by Mother Agnes.  She is not a professional video forensic analyst... we have found no evidence to indicate any of the videos were fabricated.".  In addition to that, he addressed the questions raised by her report

Lavrov then cited an open letter sent to President Obama by former operatives of the CIA that cites the Mint Press report and states that they are "unaware of any reliable evidence that a Syrian military rocket capable of carrying a chemical agent was fired into the area."

The UN chemical inspectors investigation described the size and structure of two rocket delivery systems used and report the direction some of the rockets likely came from. The report doesn't ascribe blame but present evidence that is damning for Assad.

In addition to these claims, on October 1st, Lavrov, referring to an earlier chemical attack in Khan al-Assal the Russians have blamed on the opposition, stated


We have no doubt that sarin gas – which was used on March 19 in Aleppo, is home-made… We also have information to corroborate that in the course of the tragic events of August 21, when chemical weapons were used, sarin gas of a very similar chemical signature to the one on March 19, was used, but of a much higher concentration

Again, a Khan al-Assal link, but instead of claiming the same type of rocket was used in both attack (which the UN report seems to have disproven), Lavrov is now claiming it was Sarin with a very similar chemical signature.  Not only that, it's home-made Sarin, and following the logic of his earlier claims, this is home-made Sarin made by the Saudi's and provided to the Syrian opposition in Damascus, and therefore must have also been provided to the opposition for the Khan al-Assal attacks.  If true, this would implicate the Saudi's in not only the August 21st attack, but also the earlier Khan al-Assal attack, which would obviously be huge.  On October 4th Interfax reported


A group sent by Saudi Arabia from Jordanian territory is responsible for the August 21 chemical weapons provocation that was staged in the Eastern Ghouta suburb of Damascus, Russian diplomatic sources told Interfax.

"Having analyzed this information, which was received from a whole range of sources, we are getting the picture confirming that the criminal provocation in Eastern Ghouta was committed by a specialized group that was sent by Saudi Arabia from the territory of Jordan and acted under the cover of the Liwa al-Islam group," one of the sources said.

So now we have a "specialised group" acting under the cover of "Liwa al-Islam" staging "criminal provocation", who traveled to Eastern Ghouta via Jordan.  It's unclear if they brought the barrels of home-made Sarin with them, or they were already there when they arrived.  Despite the claimed linked between the Sarin used in the Khan al-Assal attack and the Eastern Ghouta attack, according to Russia it must have been two different groups responsible, because when they submitted their report on the Khan al-Assal attack to the UN, they stated


It was determined that on March 19 the rebels fired an unguided missile Bashair-3 at the town of Khan al-Assal, which has been under government control. The results of the analysis clearly show that the shell used in Khan al-Assal was not factory made and that it contained sarin


According to Moscow, the manufacture of the ‘Bashair-3’ warheads started in February, and is the work of Bashair al-Nasr, a brigade with close ties to the Free Syrian Army.

Or maybe, as Russia's attempts to blame the opposition for the August 21st attack get more convoluted, they make less and less sense.